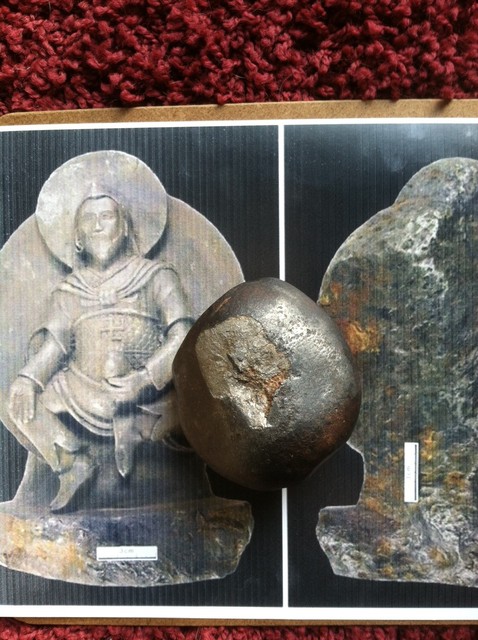 Pictured with the Ironman meteorite (ataxite) of Tibet... Nazi's in search of ancient spiritual artifacts of power in 1938 took the statue (weighing ca. 22#) from their country. A Rare Meteorite...Ancient Buddhist statue made of meteorite, new study reveals.

It sounds like an artifact from an Indiana Jones film: a 1,000-year-old ancient Buddhist statue which was first recovered by a Nazi expedition in 1938 has been analyzed by scientists and has been found to be carved from a meteorite. The findings, published in Meteoritics and Planetary Science, reveal the priceless statue to be a rare ataxite class of meteorite.

The statue, known as the Iron Man, weighs 10kg and is believed to represent a stylistic hybrid between the Buddhist and pre-Buddhist Bon culture that portrays the god Vaisravana, the Buddhist King of the North, also known as Jambhala in Tibet.

It is unknown how the statue was discovered, but it is believed that the large swastika carved into the centre of the figure may have encouraged the team to take it back to Germany. Once it arrived in Munich it became part of a private collection and only became available for study following an auction in 2009.

“The statue was chiseled from an iron meteorite, from a fragment of the Chinga meteorite which crashed into the border areas between Mongolia and Siberia about 15.000 years ago.”
(Tip: David Gluck)
This is just so cool. The Stuttgart University team who studied it was able to classify it as an ataxite, a rare class of high nickel, iron meteorite. The statue itself is worth considerable value but being made from such a rare material it is considered INvaluable. However, there is no mention in these articles I could find about returning the item to Tibet where it originated.