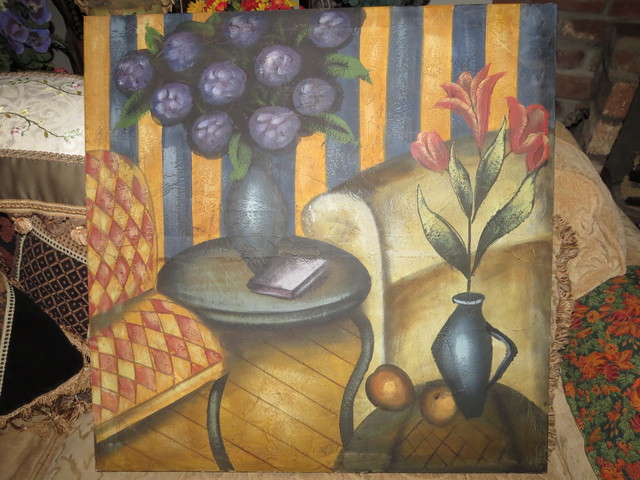 Table, Napkin, and Fruit (A Corner of the Table) (1895-1900)
After studying Dutch and French Old Master still life painting at the Musée du Louvre and other Paris galleries, Cézanne formulated his own semi-sculptural approach to still lifes. Typically strewn across an upturned tabletop, Cézanne's pears, peaches, and other pictorial elements seem at once to rest on a solid, wooden plank and yet float across the surface of the canvas like a new kind of calligraphy. As if to press home that point, Cézanne typically includes chairs, wooden screens, water pitchers, and wine bottles to suggest that the gaze of the viewer rise vertically up the canvas, rather than plunge deep within any implied corner of a real kitchen.

Paul Cézanne was the preeminent French artist of the Post-Impressionist era, widely appreciated toward the end of his life for insisting that painting stay in touch with its material, if not virtually sculptural origins. Also known as the "Master of Aix" after his ancestral home in the South of France, Cézanne is credited with paving the way for the emergence of twenthieth-century modernism, both visually and conceptually. In retrospect, his work constitutes the most powerful and essential link between the ephemeral aspects of Impressionism and the more materialist, artistic movements of Fauvism, Cubism, Expressionism, and even complete abstraction.
Key Ideas
Cézanne ultimately came to regard color, line, and "form" as constituting one and the same thing, or inseparable aspects for describing how the human eye actually experiences nature.
Unsatisfied with the Impressionist dictum that painting is primarily a reflection of visual perception, Cézanne sought to make of his artistic practice a new kind of analytical discipline. In his hands, the canvas itself takes on the role of a screen where an artist's visual sensations are registered as he gazes intensely, and often repeatedly, at a given subject.
Cézanne applied his pigments to the canvas in a series of discrete, methodical brushstrokes as though he were "constructing" a picture rather than "painting" it. Thus, his work remains true to an underlying architectural ideal: every portion of the canvas should contribute to its overall structural integrity.
In Cézanne's mature pictures, even a simple apple might display a distinctly sculptural dimension. It is as if each item of still life, landscape, or portrait had been examined not from one but several or more angles, its material properties then recombined by the artist as no mere copy, but as what Cézanne called "a harmony parallel to nature." It was this aspect of Cézanne's analytical, time-based practice that led the future Cubists to regard him as their true mentor.