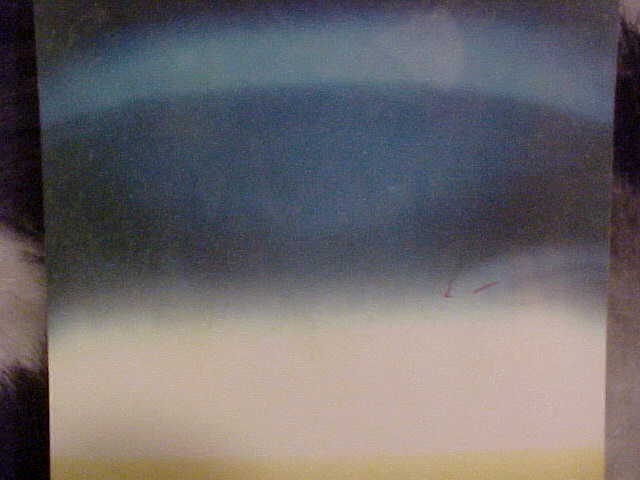 Two ships in this picture)
I met Chuck Hand in the early 80's, outside of Sonora, California.
He had quite a few UFO stories to tell, base constructions, big foot residing in near by mountains where he lived and small red light probes, as he called them. He thought that if anyone were to approach these construction sites the ET's would be alerted by the small probes. This assumption was based on his observations of them. Big foot was seen and encountered by people in several of these area's and so on and etc.. One of these stories was about his photo (photo inset below) and how he thought it might have been arranged by these ET's for the taking. He told me he was driving late one night heading towards Confidence near Sonora, Ca. where he was living at the time. He said he was in a clearing and approaching tall pines up ahead near a turn in the road and suddenly he heard in his mind something like broken English speaking to him. Next a bluish, disc, UFO swings into view from around the tall pines and flew right up to the front of his car while he was still driving. He immediately thought to grab his Polaroid camera that was sitting next to him on the front seat of his 1968 Mercury. He said as he attempted to lift the camera up with his right hand, the strap got caught on the floor shift, so he tried pulling harder to untangle it and he said the camera twirled up upside down and snap, it took a picture. The picture shows the flash of the camera on the front wind shield and the yellow he said was the dashboard. He said as you can see it looks like they posed for the shot. And what he didn't see at the time when the picture was taken was that there was a second UFO in the photo. He said that the second ship must have been right behind the first one. As you can see in the photo, it's rim is different from the first one. For an unknown reason, He said it felt it was intentionally taken this way and that it was a personal gift to him..because after the snap shot was taken he said he then quickly pulled over and got out of the car to see if he could get more pictures. Well, he then saw that there were more of them, three more of the UFO's to be exact and so snap, snap, snap, more clicking away with the camera. The camera was aimed directly at the ships as they, in his words, flew playfully and slowly and silently away, just skimming the tree tops. Bobbing up and down until they were out of sight. Well, not one of those other pictures he took showed anything on them. A night he said he'll never forget. Oh yes, he did have problems with strange characters when thought of showing his photo proofs. They? warned him off from doing that. Maybe the attitudes have changed since those days. We do have a treaty not entirely understood with aliens and our Governments. Chuck said I could show his photo to anyone I wanted... So, Enjoy. Maybe, if he sees it on the Internet he'll get in touch with me again and with any luck could share more of those enjoyable adventures he might have had over the years with the UFOnauts from other worlds.
Dex